I have written an e-book, Does the Bible Really Say That?, which is free to anyone. To download that book, in several formats, go here.

The posts in this blog are licensed under a Creative Commons Attribution-NonCommercial-ShareAlike 3.0 Unported License. You can copy and use this material, as long as you aren't making money from it. If you give me credit, thanks. If not, OK.

Is Genesis 1-11 history, or myth? Comparing the sequence of events in Genesis 1 and Genesis 2

First, what is a myth? The Project Gutenberg eText of Webster's 1913 dictionary says this:
1. A story of great but unknown age which originally embodied a belief regarding some fact or phenomenon of experience, and in which often the forces of nature and of the soul are personified; an ancient legend of a god, a hero, the origin of a race, etc.; a wonder story of prehistoric origin; a popular fable which is, or has been, received as historical.
2. A person or thing existing only in imagination, or whose actual existence is not verifiable.
And what is history? The Project Gutenberg eText of Webster's 1913 dictionary says this:
1. A learning or knowing by inquiry; the knowledge of facts and events, so obtained; hence, a formal statement of such information; a narrative; a description; a written record; as, the history of a patient's case; the history of a legislative bill.
2. A systematic, written account of events, particularly of those affecting a nation, institution, science, or art, and usually connected with a philosophical explanation of their causes; a true story, as distinguished from a romance; -- distinguished also from annals, which relate simply the facts and events of each year, in strict chronological order; from biography, which is the record of an individual's life; and from memoir, which is history composed from personal experience, observation, and memory.
Some Bible scholars claim that Genesis 1-11 is history. If I understand them, they mean that this text relates real events which happened in sequence as they are read in that text. Other Bible scholars claim that the same passage is myth. If I understand them, they mean that this text is true, in the sense that we are to learn from it, and that it tells us about God, but that it does not necessarily portray real events, nor events in the sequence in which they actually happened.
One author who thinks Genesis 1-11 is myth is Joel Edmund Anderson. Here's an excerpt from one of his blog posts:
Saying Genesis 1-11 is myth doesn’t denigrate it. “Myth” doesn’t mean “untruth.” It is a specific genre of ancient writing that was used to describe a culture’s worldview regarding what that culture believed about (a) the gods/God, (b) the nature of human beings, and (c) the nature of the created order. It wasn’t trying to convey historical facts. It was trying to articulate that “worldview lens” through which that culture could interpret their world.
Anderson has written many other blog posts on these topics. So have others. (Here's another of Anderson's posts, pertinent to the topic of the post you are reading.)
What should we learn from Genesis 1-2? I am not God, so cannot be certain of what He wanted us to grasp, but the things that we were meant to learn probably included, first and foremost, that there is only one real God, powerful and wise enough to make the world as it is. Very possibly, mentioning the sun and the moon as appearing on the fourth day, rather than the first day, and without specifically naming them, shows us, and the ancient Hebrews, that we shouldn't worship the sun and the moon. We are also probably meant to learn that God is responsible for beauty, diversity and order in the world, and that humans have special responsibilities -- we are, in some senses, god-like.
Let's now look at Genesis 1 and Genesis 2: 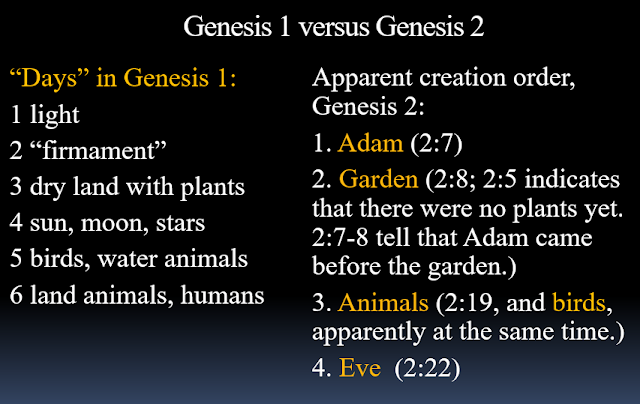 (This graphic gets tangled up with other parts of the blog, on some platforms. The graphic is still there, as a separate file. Feel free to use the graphic, with no attribution needed.)
There are significant differences in the sequence of events in Genesis 1 vs. Genesis 2. Claims that these two chapters both set forth, in sequence, the events of the creation, are not supported by a plain reading of Genesis 1 and 2. There are various ways of explaining the differences between the Genesis 1 sequence, and the Genesis 2 sequence, and perhaps some of them are valid, but the idea that there is a plain reading of these two chapters, setting forth events in sequence, is not supported.
Thanks for reading!
Posted by Martin LaBar at 3:25 PM

Thank you for your wise addition to my post.

Significant posts (most have important comments)