I have written an e-book, Does the Bible Really Say That?, which is free to anyone. To download that book, in several formats, go here.

The posts in this blog are licensed under a Creative Commons Attribution-NonCommercial-ShareAlike 3.0 Unported License. You can copy and use this material, as long as you aren't making money from it. If you give me credit, thanks. If not, OK. 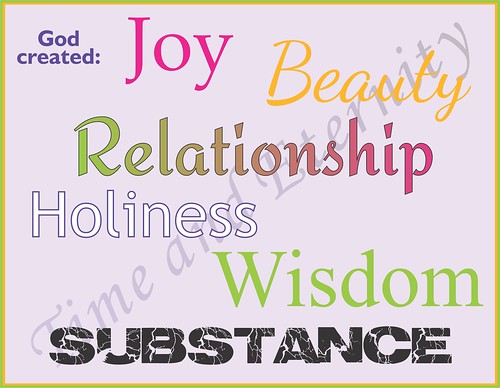 John 1, Colossians 1, and other passages indicate that God the Son was and is the chief agent in creation, and in sustaining it.

So what did God create?
1. Substance (including energy, which is a type of substance – e = mc2).
Matter and energy are creations of God. He is outside of His created universe, and made it come to be from nothing. However, He can and does enter it, as shown in the miracles of the Old Testament, the Incarnation of God the Son, and the presence of God the Holy Spirit. Ken Schenck, in this post, points out that God created the nothing, too. It wouldn't have been there without God.

It is possible that all the types of sub-atomic particles, or even each and every such particle, all the elements, all the types of heavenly bodies, the earth itself, and the kinds of living things, were brought into being by individual creative acts. It is also possible that God’s planning was so extensive and complete that He created matter so that most or all of these things emerged, over time, as a result of the Big Bang. Either way shows God’s limitless intelligence and creativity, (See here for information on the suitability of sub-atomic particles for the existence of the universe.) and we don’t need to know which of these (or both) has been true.

Satan probably has no power to create any kind of substance, but he can make use of created things.

2. Time/Eternity
Substance has been created in time, which is another of God's creations. Since that is true, God is not in time, but outside of it, in eternity -- God can experience the past, present and future. Or, perhaps, God created eternity, too. All of the entities shown in the graphic play out in time, and in eternity. I'm not clear as to whether eternity is just time stretched out infinitely into the past and the future, or whether time somehow exists in eternity, and it doesn't matter what I think. I'll leave that question to God.

3. Beauty
All beauty, imagined* or existent, of pattern, appearance, sound, and form, either:
was created by God;
is a natural emergence from what God created;
is based on what God brought forth;
or is possible because He gave humans the ability to be sub-creators.
(J. R. R. Tolkien, who was a Christian, used the word sub-creation about the fantastic worlds created by himself and others.)

*“Imagined,” because, for example, Beethoven was so deaf by the time his great Ninth Symphony was performed that he could not hear it, and had not heard it, except in his head, while he was composing it. Similar processes of imagination occur during writing, painting, and other creative arts, and also in the sciences, even in sports. Newton imagined his Law of Universal Gravitation – he didn’t develop this from experiments. That Law’s simplicity is one of many scientific phenomena that scientists sometimes say possess beauty, because of their simplicity (at least to the scientists!) and explanatory power:
F = (g x m1 x m2)/r2
The scientific search for patterns in elementary particles, and for broadly applicable formulas and laws (such as the so-called theory of everything, or the “God particle”) is motivated by a belief that there is an underlying pattern and beauty in the way things are. Einstein, who was not a believer in a personal God, sometimes spoke as if there was a God who had arranged things in the way that they were, understandable, describable, and relatively simple.

Richard Feynman, Nobel laureate, said: “What is it about nature that lets this happen, that it is possible to guess from one part what the rest is going to do? That is an unscientific question: I do not know how to answer it, and therefore I am going to give an unscientific answer. I think it is because nature has a simplicity and therefore a great beauty.” “Seeking New Laws,” pp. 143-167, in Richard Feynman, The Character of Physical Law, New York: Modern Library, 1994. Quote is from p. 167. I have read most of Feynman's popular writing, and seen no evidence that he believed in God at all.

Satan probably has no power to create beauty of any kind, although he can mimic God’s good creation, and can use beauty as an evil force. (Pornography, for example.) Perhaps Satan, as an angel, had creative powers that humans don’t. We don’t know. Satan apparently can imagine events that have not happened yet, or that might never happen.

Satan is incapable of forming a proper relationship with anyone. We aren’t, either, without accepting Christ’s sacrifice for sin, and following His Lordship and example.

5. Joy
God is responsible for joy. We can, and should, be joyful in comprehending and experiencing beauty and relationship, even substance. God made humor and laughter possible. We should joy in contemplating God’s creativity and goodness. “Joyful, joyful, we adore Thee” (based on Beethoven's Ninth Symphony) is found in many hymnals.

Satan has lost any capacity for joy that he had originally, and wants to drive joy out of the world.

6. Holiness
Holiness is the opposite of evil and sin. Evil and sin are the absence of holiness. God is holy, and good, and His creation started out that way. He wants us to be holy, and totally good, too, and will eventually transform created things so that they, too, are finally and eternally good. Because God is holy and good, He cannot abide sin. Our relationship with Him should be such that we stop sinning, or at least do it less frequently, and become more and more holy – more and more living a life for God, and others, and less and less living for ourselves.


Wisdom is “The ability to discern or judge what is true, right, or lasting; insight.” (The Free Dictionary). In other words, to have wisdom is to act correctly on the things you know. God allows us to have knowledge, to know things, but merely knowing things is not the same thing as wisdom. Children know a lot, but they are often not wise. Presumably Satan also knows a lot, but he has unwisely rejected God’s authority.

Thanks for reading, and thanks to my wife for suggestions.

This is the version of November 1, 2014, somewhat modified from previous versions.
Posted by Martin LaBar at 3:56 AM

Significant posts (most have important comments)